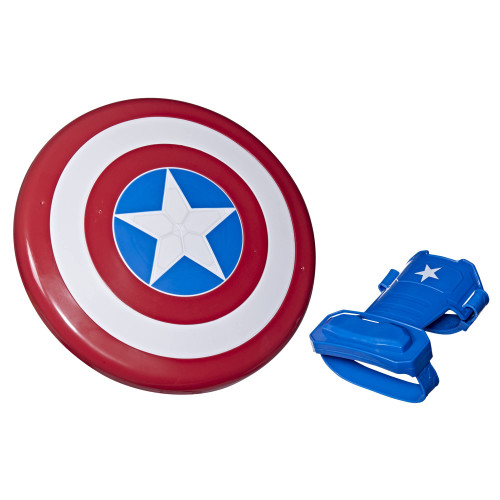 Sam Wilson, formerly the Falcon, takes on the mantle of Captain America as he
teams up with his fellow Avengers! There's more to be being a Super Hero than
capes and fancy suits. Being a Super Hero is about defending justice and
knowing when it's time to fight as a team. Kids ages 5 and up can imagine
gearing up for action and adventure alongside their favorite Marvel heroes,
like Captain America, Iron Man, Thor, and more, with Marvel roleplay toys from
Hasbro! (Each sold separately. Subject to availability.) With the Marvel The
Falcon and the Winter Soldier Captain America Magnetic Shield & Gauntlet set,
boys and girls can imagine what it's like to be Captain America! The shield
attaches to the magnetic wrist gauntlet and can be thrown as a disc when
removed. Pretend to leap into battle for justice alongside Captain America!
NOTE TO PARENTS: Gauntlet not intended to catch shield. Copyright 2022 Marvel.
Hasbro and all related terms are trademarks of Hasbro. Includes: Shield and
gauntlet. Ages 5 and up. Product contains magnets. WARNING: Small parts may be
generated. Not for children under 3 years. NOTE TO PARENTS: Gauntlet not
intended to catch shield.

MSRP:
Now: $19.99
Was:
Steve Rogers suits up as America's First Super Soldier, Captain America!Imagine leaping into adventure with Avengers figures, vehicles, and roleplay items inspired by the Marvel Universe. With this...

MSRP:
Now: $19.99
Was:
Steve Rogers suits up as America's First Super Soldier, Captain America!Imagine leaping into adventure with Avengers figures, vehicles, and roleplay items inspired by the Marvel Universe. With this...

MSRP:
Now: $24.99
Was:
Play Build Unity Figures is an important product for kids. They will always be busy building, thinking, imagining, and of course creating! Using brains for thinking and imagining, their eyes for...

MSRP:
Now: $19.99
Was:
Press his tummy and Elmo talks and sings about one of his favorite subjects: letters! He sings the classic alphabet song, encouraging your child to sing along and get familiar with the ABCs! Elmo...

MSRP:
Now: $19.99
Was:
Om nom nom! Cookie Monster is here, and this furry blue monster is hungrier than ever! Little ones can unleash their appetite for fun by pretending to feed the plush Cookie Monster his favorite snack...

MSRP:
Now: $14.99
Was:
Playing dentist is sure to create smiles - literally! Kids can feel what it's like to be on the other side of the Dentist chair with the classic Play-Doh Doctor drill 'N Fill set. Start the patient's...